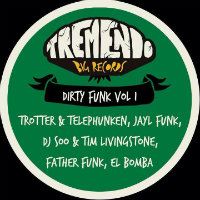 That the raison d’etre of Vol. 1 of this new series on Telephunken‘s Tremendo label seems to be to put the funk back into ghetto funk will come as no end of relief to those who were wondering if that ‘f’ word was (with honourable exceptions) becoming as redundant as the ‘funky’ in ‘funky’ house always has been. Dirty Funk opens with Trotter & Telephunken getting all stank with the seventies – a theme continued to equal party effect by Jayl Funk while DJ Soo & Tim Livingstone (egg-)roll the years back to the sixties because they ain’t just checking any funk sources, they’re checking M&S Band funk sources. Next up – Father Funk. Can’t say I’m surprised – this guy gets around more than Russell Brand and appropriately enough he’s the one comin’ atcha with the swinging breaks. All of which leaves El Bomba as rear gunner with easily his best track of the year – the understated brilliance of Reloaded. Imagine a sped-up Soul Assassins-type break with a Portishead sonic palette and you’ll get the picture.
(Out now on Tremendo )

Posted on 31st December 2012 no comments