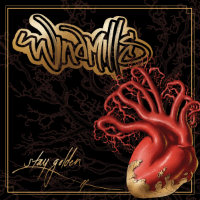 Firmly holding on to what’s golden for their third LP – er – Stay Golden, are Californian underground hip-hop crew Windmills. The outfit – consisting of producer and multi-instrumentalist Rex Rey and emcee Framework – first hit the ground in 2011 with their debut As Above, So Below delivering fresh hip-hop psychedelia best encapsulated in album track My Summer Fantasie which juxtaposed Frameworks’ rhymes with clattery funk drums and folksy flower child piano melodies and vocal harmonies. While something of that psychedelic element remained when 2014’s Broken Record came along, this sequel was more typically characterised by an increase in synth instrumentation and darker lyrical themes. Which begs the question – how to play it for ‘difficult’ number three?

Well, it transpires that Stay Golden pitches things approximately mid-way between the feel of its two predecessors and while the mood is lighter and more akin to their debut, things lean slightly towards the electronic, musically, as with Broken Record. By way of a sound analogue, you could do worse than compare it to QnC & Aim’s excellent The Habit Of A Lifetime from 2015 – especially when considering cuts like second track Ill When It’s Like This – sample lyric, “And you wonder why these kids aren’t any good at taking losses/ Cuz even when they suck you’re still telling them they’re awesome”. If it doesn’t carry quite the heavyweight NYC heft of that LP however, it’s partly because Windmills, as noted, lean towards psychedelic motifs and also because Rey’s penchant for funkier and faster drums. Indeed, on multiple occasions here, the pair turn in uptempo tracks that encourage b-boys to enact the outfit’s name – notably Fire Walk With Us – a 132 bpm monster over which Framework fires clip after clip of staccato verse. It’s a recipe successfully repeated on the slower (but still fast for hip-hop), Peak, which manages 120 bpm and employs an almost Magnum-theme-esque synth bass motif. Other highlights include b-boy friendly Silly Sucka Rap featuring this LP’s only guest spot (from Celsius 7) powered by heavily syncopated funk drums, the moody Friend Of Mine and the swirling uptempo hip-hop psychedelia of contemplative outro Arrow Of Time featuring a sung hook from Frameworks. All in all it’s a highly consistent set (arguably their best yet) and evidence of the band having comfortably settled into their sound while still being prepared to push the boundaries.
(Out now on cd/digi/ vinyl HERE)