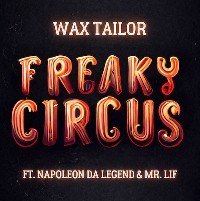 The new one from French producer Wax Tailor is entitled Freaky Circus and features the heavyweight emcee pairing of Napoleon Da Legend and Boston veteran Mr Lif. It’s also the first single off Wax Tailor’s forthcoming Fishing For Accidents LP. The tempo is very much 90s hip-hop which means it’s unlikely to be above 99 bpm and in fact this one is in the 80s. Not that there isn’t plenty going on. The beat is heavy on the head-nod and a fairground organ motif plays out over crunchy drums and a super heavy, off-kilter bassline with a hook unfolding thus, “It’s like a jungle sometimes/ People getting nervous/ It’s like a jungle sometimes/ We’re living in a freaky circus”. But what is this jungle – this freaky circus? Mr Lif – over to you: “The clowns? Oh that’s all of us who live in any town/ The prices go up; the taxes keep you run down.” I see – it’s a critique of the parlous state of global economics. Yes, well, until a significant mass of the electorate realises they’re being gaslit by thieves, the thieves will keep getting back in and the freaky circus will keep rolling!
(Out now on Lab’Oratoire)