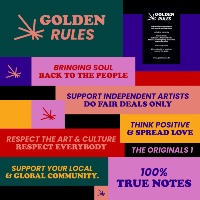 Dropping slightly later than summer (as originally intended) contemporary funk compilation LP The Originals Vol.1 from German label Golden Rules is finally here! Following the lengthy run-up of digital singles which included every one of the fourteen tracks featured hereon as a digital single, this release provides the opportunity to hear everything on physical format too coming, as it does, on both vinyl and retro cassette as well as digital. Which is as it should be given the array of talent from the field of contemporary funk and soul on display including The Mighty Mocambos, DeRobert & The Half Truths, The Soul Surfers and Gizelle Smith. As that list reveals, the label might be based in Germany but this is an international affair with contributions from both sides of the Atlantic and a generic palette broad enough to include JBs-style funk workouts and soul burners along with more cinematic and psychedelic grooves.

On this one though, it’s some of the less well-known names who provide the choicest cuts. The Drawbars’ Shinjuku Strut, for example, is an intense organ instro. while Laura Llorens & The Shadows Of Love deliver sweet, sweet soul on All Or Nothing. Elsewhere, The Gripsweats invite vocalist Oliver James’ along on This City for a brooding guitar-led heavy soul cut, Outer Space provide cinematic, Ethio-jazz-tinged thrills on Magnetic Monsters while, perhaps best of all, Nashville outfit Magic In Threes dig proper paydirt with the fattest of soundtrack psych-funk on the menacingly hypnotic Diggin’ Dirt. Here’s to Vol. 2!
(Out now on Golden Rules)