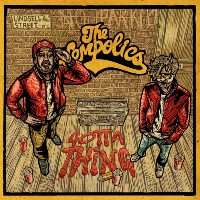 Ahead of new LP, Kiss Cuddle & Torture Vol. 2, The Hempolics release new single Gotta Thing. And while what they’ve got might start all innocuously as stateside rapper Cojack delivers half minute of bars over a beatless, bass n FX groove, things soon switch up into a mellow 129 bpm skank. Mellow 129 bpm skank?! Yep – it’ll be the weed influence – though, thinking about it, they might want to lay off that at the minute – last thing you need is a tight chest right now. I say ‘the weed’ though, it’s the bass that’s king on this one, so all the other elements apart from the drums are relatively muted and it comes on like nothing so much as being cradled in the womb-like embrace of bass. Albeit while bass is skanking on the spot. Or something.
(Out now on Zee Zee Records – though not via the Bandcamp, it seems)