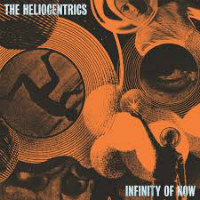 Been missing the Heliocentrics? Your wait is over for here’s Burning Wooden Ship, the first single to be taken from forthcoming album Infinity Of Now due shortly on label Madlib Invazion. And if this single’s anything to go by, the LP promises to be every bit as psych-jazz-funky as you’d expect. A song of several stages, it initially features the haunting tones of songstress Barbora Patkova over clattering drum breaks which is superseded by a tense beatless welter of retro library music FX before the reintroduction of a new beat formed from unsyncopated hi-hats, another pregnant FX-drenched interlude and finally the return of Patkova and that drum break till crescendo and fade well over five and a half minutes later. Five and a half minutes? They won’t get that on a 45.
(Out 24 January on Madlib Invazion)