THE HARLEM GOSPEL TRAVELLERS: Fight On! 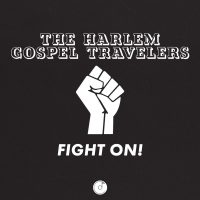 Okay so Juneteenth might have been Friday just gone but news of The Harlem Gospel Travellers’ Fight On! didn’t land on the monkey’s virtual doormat until Saturday (international time zones being what they are) and it was a very busy weekend. Still, better late than never as the band that grew out of a gospel class being taught by Eli Paperboy Reed stick it to the man in the classic mould with soaring gospel-funk. Fight On! was inspired by the Rev. Cleophus Robinson Jr.-penned Hold On Just A Little While Longer and features a band put together by Reed which included drummer Aaron Frazer from Durand Jones & The Indications. All proceeds of the track go to The Movement For Black Lives.
(Out now HERE)