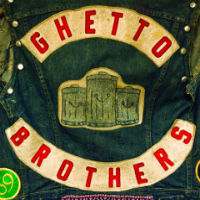 Some records are merely rare. Some are so rare that the artists in the act that recorded them don’t even have a copy. Power Fuerza by New York’s Ghetto Brothers is one such album. Happily for them it’s getting a re-release on its fortieth anniversary. Admittedly its mixture of Latin-flavoured soul and rock from 1972 is probably not typical monkeyboxing fare but then back in the day you’d find all kinds of acts mixing it up and it was only a few years later that the mighty Kool Herc, for example, was spinning cuts by a few of them – (The Incredible Bongo Band and Baby Huey spring to mind) amongst the funk and soul in his sets. Indeed as singer Benjy Melendez puts it, “We were doing rock n’ roll but we added a little soul for our black brothers, Latin for those who like Latin, rock n’ roll for those who like rock n’ roll.” There’s also another link, or rather parallel with hip-hop too since the band members were Puerto Rican gang members looking for a way out of turf fights – Afrika Bambaataa’s and the Zulu Nation anyone?

Of course the Power Fuerza LP was released at a time when funk and soul were still king, six odd years before Kool Herc kick-started hip-hop. When you listen to it though, you’ll understand why it’s coming out on a label known for it’s funk and soul releases. Power Fuerza comes on as a Latin cross between the aforementioned Baby Huey (in it’s mixture of soul and rock) and jangly sixties groovers the Byrds – in terms of melodies, singing and – well – jangly-ness. If you were looking for the obvious dancefloor cut it would have to be the bongo-fied final track, Ghetto Brothers Power while There Is Something In My Heart and You Say You Are My Friend find this NYC band sounding like classic West Coast psychedelia but with more prominent percussion.

Unsurprisingly, Power Fuerza was a local hit on its original release (gang members used to cross turf lines just to hear them) but bungled promotion meant it failed to take off and it has been largely forgotten for four decades – although occasionally original copies shift on eBay for three-digit figures. I’m not exaggerating when I say that this is a classic and stands with the best stuff from the late sixties/ early seventies. Get a flavour below with DJ Akalepse‘s promo mix and a vid. for Ghetto Brothers Power.
(Out 20 November on Truth & Soul – pre-order HERE)

Posted on 6th November 2012 no comments