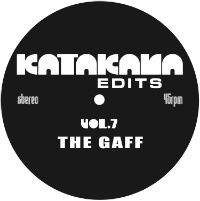 Now that’s what I’m talking about. The Gaff goes off on a remix/ edit tip delivering a sterling four-tracker that’s had poor old Juno scratching their heads for a generic pigeonhole and settling on ‘Broken Beat/Nu Jazz/Nu Soul.’ Frankly that makes it sound like some chin-stroking jazzbo’s got hold of a laptop and made some pretentious old shit. In fact this delivers straight up dancefloor ammunition – to wit a steamy Mambo No. 5, trippy disco cut Funny Saga, the hypnotic Afro-funky High Life and the plump Meter-ised funk of Zamboozee. So that’s Latin, disco, Afro-funk and funk. There now – that wasn’t too difficult was it. But apparently a vinyl release was. I hear the publishing industry is apparently re-appraising the idea of print-on-demand and ways to make it more cost-effective. Onward the press-on-demand vinyl revolution, I say.
Out now on Katakana Edits