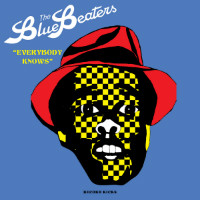 You might have thought it would be fairly catastrophic for a band who have been around since the mid-nineties to lose their lead singer, yet The Bluebeaters didn’t miss a (blue)beat, when original vocalist Giuliano Palma left for a solo career two years ago by filling his empty check ska loafers with a bandmate, Pat Cosmo, from Palma’s other band Casino Royale. And this Italian ska/ rocksteady super group haven’t looked back.

Obviously, the recent flurry of single activity (Toxic, I Saw Mommy Kissing Santa Claus, Roll With It) has been leading somewhere and it was clearly to this – the expectations-exceeding, fourteen-track Everybody Knows. Listen to a certain Mr Rodigan who has recently championed the band and he’ll tell you that they, “take glorious obscurities” and give it “their own unique ska flavour”. I’m not sure anyone would describe major chart hits by the likes of Britney Spears, Oasis, The Smiths, Bruce Springsteen, The Undertones or Kraftwerk (covers of which constitute nearly half this LP) as ‘glorious obscurities’ but he’s right about the unique ska flavour as the band flawlessly re-capture the authentic sound of Kingston in 1964. As you might expect, a well-executed LP of authentic-sounding ska covers is a pleasure to listen to but it’s actually the covers of what might more genuinely be described as ‘glorious obscurities’ that are the best cuts – the band’s opening version of Delroy Wilson’s Somebody Has Stolen My Girl or their take on The 5 Royales’ Catch That Teardrop for example. The standout however is a beautiful, scorching version of The Silvertones’ True Confessions, which utterly tears up the dancefloor and will ensure that, if they didn’t prior to this, everybody will know about The Bluebeaters afterwards.
(Out 13 April on Record Kicks)