THE ALLERGIES: Keep It Moving EP 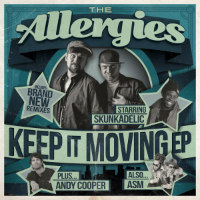 You’re going the distance, going for speed, carefully clambering up the greasy pole of the music business but what to do in the lull between albums? Why – keep things moving of course! And so it is that Bristol’s funky sons The Allergies drop new four track EP Keep It Moving. The title track, naturally, is the Skunkadelic-featuring number from the boys’ Steal The Show album while the balance of cuts is made up of remixes of three other LP tracks. The first of these is an even more funked-up take on the ASM-featuring When The Heat Comes Down which now has something of Groove Is In The Heart about it with the percussion and the background party conversation sounds. Then it’s the turn of label-mate Smoove to give some percussive leverage to Andy Cooper fast rap showcase Run It Back and finally, Honey Larochelle-featuring neo-northern soul number Entitled To That gets the ultimate laid-back roots makeover for some hip-grinding smoochy time. And if that lot doesn’t keep things moving, I don’t know what will.
(Out now on Jalapeno Records)

Posted on 17th February 2019 no comments