THE ALLERGIES: Steal The Show 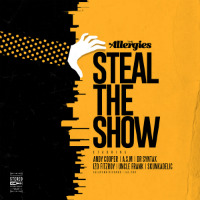 For god’s sake nail down down anything that moves before The Allergies steal the show. They’re after the lot – underground love, mainstream recognition, old samples, new beats and all the guest vocalists they can lay their hands on. What’s all the fuss? Why – it’s the arrival of new album Steal The Show of course – Moneyshot and Rackabeat’s third in just two years. Man that is going some. Surely there’s a danger of over-exposure? The potential dilution of quality? How long before the whole project blows up and these two are selling the photo-story of their disintegrating celebrity lives to OK! magazine or eschewing the rollercoaster of backstage drug-snorting and groupies for a humble career as music journos wondering where it all went wrong? I think it’s time we had a track-by-track gander:

1. FADE AWAY feat. ANDY COOPER
No beating about the bush then – it’s straight to the – er – moneyshot with this dancefloor hip-hop bomb that recalls Taste The Secret-era Ugly Duckling aided no doubt by the presence of UD emcee, Andy Cooper.

2. CAN’T KEEP WORKING THIS HARD
…maybe they can’t, but that’s not going to stop the record public demanding the boys toil until exhaustion sets in if they keep generating neo funky-soul nuggets of this calibre.

3. WHEN THE HEAT COMES DOWN feat. ASM
When the heat comes down? When wouldn’t it with ASM atop a guitar-led hip-hop stomp like this?

4. DANCE NOW
You will. More contemporary funky soul bizniz and a rock-solid groove.

6. STEAL THE SHOW feat. ANDY COOPER
Official ‘unofficial third Allergy’ AC, gets into story mode over an uptempo blaxploitation-laced beat and lays down the boys’ manifesto: if they don’t give it to you, nick it.

7. LET’S DRIVE feat. IZO FITZROY
Let’s drive! Where shall we go? Where does any successful business partnership go with its eye to the future when things are going well? That’s right, we’re on our way to beat diversification-land along the acid jazz highway with fellow Jalapeno Records signing, Izo FitzRoy…

8. KEEP IT MOVING feat. SKUNKADELIC
…with time for a change of driver at Brit-hop junction as Skunkadelic takes the mic…

9. NO LOOK PASS BOP feat. UNCLE FRANK
…and then it’s back to what they do best – breakneck funk-laced beats with singalong hooks.

10. I DON’T KNOW feat. ANDY COOPER
I do, and the answer is yes. Definitely. Very much so. More please. The shadow of both early De La Soul and sitar-funk loom over this tongue-in-cheek exploration of women who can’t decide about a bloke.

11. COUNTDOWN feat. DR SYNTAX
Guest-spot time for the ubiquitous UK wordsmith and he wastes no time laying waste to the mic.

12. RUN IT BACK feat. ANDY COOPER
What were they thinking? Nearly the end of the LP and not yet a trademark speed-rap from Mr Cooper yet? Go on, then. If you must. Damn – that is fast. 131 bpm to be precise.

13. SAMBA FOX
Didn’t she used to get her boobies out in newspapers? Oops – my bad that was Sam Fox. Samba Fox on the other hand will have you getting your boobies out in night clubs to its crazy Brazilian-based antics.

COMMENTS: Steal The Show is another dancefloor triumph and further proof (were it needed) that the curse of the third album is often bollocks except in the case of shit indie bands and reality show chancers. Party breakbeat music at its finest as The Allergies half-inch the attention of anyone within earshot.