THE ALLERGIES: Going To The Party/ Utility Man (Vinyl 7″) + video 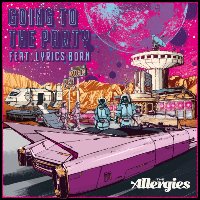 Who was it, less than two months ago who speculated that The Allergies’ Lyrics Born-featuring, Promised Land LP cut, Going To The Party, might be, “A future 45?”. Oh yes, it was the monkey and as a prediction, it was ‘all the way right’ which isn’t a bad description of the boys’ new 7″, the A-side of which is, of course, peak-time funky hip-hop throwdown, Going To The Party! So what’s the flip? Why Utility Man featuring still unofficial (but ever reliable) ‘third’ Allergy, Andy Cooper, of course.  And that calls for a video, doesn’t it? Yes, it certainly does.  How to convey the lyrical theme of fixing stuff via an audio-visual medium though?  Perhaps the trope of the comedy low-budget local TV advert (retro, of course) in which Moneyshot and Rackabeat milk maximum cringe from watchers as bungling presenter and punter respectively, while Cooper supplies effortless bars and braggadocio – no mean feat. whilst wearing hi-viz and and safety visor. Yes, that ought to do it!
(Pre-order now; ships mid-January on Jalapeno Records)

Posted on 29th November 2021 no comments