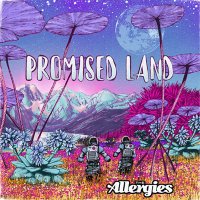 The Allergies finally make it to the Promised Land on their new studio LP and boy have they got every intention of taking you there as well! It’s the duo’s fifth studio LP since 2016 though they’ve maintained such a ridiculously high output of releases in that time as to render surprise at such a schedule obsolete. Let’s consider instead the mental anguish they must have experienced at being denied the adrenaline highs of live gigs and the party atmosphere during lockdown when the tracks on this one were written. You can tell how badly they must have been jonesing for action and how much energy they must have had pent up from the way Promised Land sounds like they bumped forward all the partiest bangers lined up for the next five Allergies LPs (don’t worry, they’ll think up plenty more to fill the gaps before those are released) for this set – I mean just have a gander at the evidence:

1. LEAN ON YOU (feat. Dynamite MC)
Ah yes – the half-time former single with the double speed percussion and Dynamite MC in full effect. Are you coming or going? Who knows but you’d better not be leaning on anyone because next up is…

2. LOVE SOMEBODY
…the thrill of that tried and tested Allergies formula of old soul re-purposed and dressed in uptempo party breakbeat threads.

3. PROMISED LAND
Here’s something a tad slower though – time for a breather perhaps? Breather! What are you? Some kind of pussy? The tempo might’ve dropped but this is a stadium-filling, gospel-tinged banger!

4. NEW THING
No, you can’t have a rest! What is wrong with you? Here – try this new soul-clappy thing the Allergies have done.

5. UTILITY MAN (feat. Andy Cooper)
Wondered how long it would be before Mr Cooper turned up and here he is on a midtempo slab of funky hip-hop with some double-speed mic manipulating so, no, you won’t be sitting down for this one either…

6. MOVE ON BABY
…and you won’t even want to sit down for this Latin-fuelled uptempo heater however knackered you are.

7. GOING TO THE PARTY (feat. Lyrics Born)
Going to the party? That’s right, all that action already and you hadn’t even got there yet. Quannum alumnus Lyrics Born and the boys will certainly make you feel like you have by the end of this album highlight and centrepiece. A future 45? Let’s hope so!

8. ARE YOU READY (feat. Andy Cooper & Marietta Smith)
Are you ready? Does a bear shit on the pope? You’re ready all right – for funk-fuelled uptempo party hip-hop!

9. WORKING ON ME
You’re sweaty, your legs are killing you and your voice is hoarse – so the boys have taken pity on you. Ha! No, they haven’t. Another typically-Allergies old soul-fuelled workout.

10. JUMPING OFF
Followed by this Wiseguys-style, self-sampling, b-boy friendly effort.

11. THE BEAT
You knew from the title this one would still be all about moving the crowd, right? Though maybe not that it would have a disco/ blaxploitation vibe…

12. UP DOWN LEFT RIGHT (feat. Andy Cooper & Marietta Smith)
…forwards, backwards – you can move in any direction you like as long as you keep moving!

13. YOU
Oh go on then – here’s something more chilled – it’s the end of the set after all. As close as The Allergies get to mellow with some downtempo soul.

COMMENTS: Christ! It’s as if enforced lockdown inaction has given these two demonic purpose or something! They’re like a pair of party breakbeat drill sergeants! If you’ve been looking for the party breakbeat set to work out to – you’ve found it right here. And while the duo expand their sonic template on Lean On You, the title track, New Thing and You they also serve up plenty of their more tried-and-tested formulae in their most energetic long-playing offering to date. The only question is, can you keep up?

BEST TRACKS: Lean On You, Promised Land, Move On Baby, Going To The Party, Are You Ready,
(Out now on Jalapeno Records)