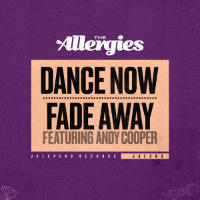 I think it was C+C Music Factory who once sang Everybody dance now!, and if new Allergies single Dance Now features a similar lyric and an implicit intention to make you sweat, let’s all offer up a prayer of thanks that the sort of dancing required for this uptempo sister funk banger is very much of the b-boy persuasion. And if you’ve seen the kind of moves that used to accompany mainstream dance hits of 1989 – that’ll no doubt prompt an audible sigh of relief. Don’t let that uprock off the boil either though, for uptempo flip Fade Away features Andy Cooper, (who else) delivering some 121 bpm bars over a brand-new old-fashioned beat and providing a sung bubblegum hook. You know the next LP is going to be smoking! Players below along with Dance Now vid.
(Out 7 September on Jalapeno Records)

Posted on 5th September 2018 no comments