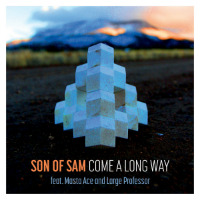 Originally formed in ’03, underground hip-hop outfit Son Of Sam are back for ’17 with new single Come A Long Way which features no fewer than two legendary NY emcees – Large Professor and Masta Ace. The outfit consists of producer Tom Caruana (of Wu-Beatles Magical Mystery Chambers fame), rhythm section John and Joe Sam (whose background includes stints with both Incognito and Leroy Hutson) plus keys and sax man Richard Halligan. What topic could possibly provide the lyrical content for such a meeting of minds though? Perhaps Ace and Pro looking back on their lives to date? Yes, that should do it. And now for a beat. Boom-bap, obviously, but maybe a little something to give it a properly retrospective vibe. I know! How about some Wurlitzer organ throughout? Nothing captures the whole ‘life as a journey concept’ more than that end-of-the-pier sound! Come A Long Way is the first single off forthcoming album seventeen-track album Cinder Hill with a vast all-star array of guests including Guilty Simpson, El Da Sensei, Edo G, Sadat X and Mr Thing. Players and El Tacodor designed video below.
(Out now HERE)