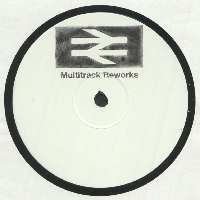 One man who’s always got numerous irons in the fire is the man the monkey likes to call ‘Berry Geordie’. And so busy is Smoove (for it is he) that, in fact, it’s difficult to stay on top of all those releases – September’s Wack Records release Queensbridge vs Brooklyn hip-hop booty 45 for example which passed with nary a word from the monkey. He was last heard of around these parts with his remix of Whirlwind D’s Labels just last month, and soon his new Oonops Drops 45 (of which news very shortly) will – er – drop. Before that though, it’s all about his two disco edits for Multitrack Reworks. Exhibit one is his beat-augmented, extended remix of Chaka Khan’s disco classic Clouds a fine edit that manages to update a classic while maintaining sympathy for the original. On the flip-side you’ll find exhibit two, Slave, on which he pulls the same trick again with Grace Jones’ Slave To The Rhythm which is what punters will be when you drop either one of these cuts. There is only one format for extended disco remixes to appear on of course and that is the vinyl 12″, which is precisely what this comes out on. Let’s just hope nobody tells ‘Big’ Al ‘I do disco round here’ Kent – or all hell could break loose!
(Out now on Multitrack Reworks US)

Posted on 7th December 2021 no comments