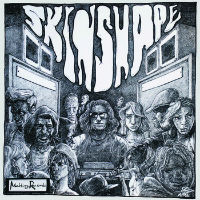 Skinshape makes sure everything’s skin-shape and breakbeat fashion with his debut album – er – Skinshape on Athens-based Melting Records. Well, I say ‘album’ – at seven tracks and only thirty-two minutes there are longer EPs out there – but don’t be fooled by the brevity. If it’s original folksy psychedelic breakbeats you’re after, your ship’s just come in. Why? Because Will Dorey of Horus Records (for Skinshape is he) has spent four years crafting beats, recording vocals and playing most of the instruments on this project in order to create something that sounds like it was beautifully forged from dusty old samples.

It’s not all him of course – other musicians played an occasional part and two of the vocal tracks feature convincing turns both soulful (Aaron Paul on the stripped back mellow of Sunday Morning) and mournful – ‘Anina’ on the melancholy Stabo. Don’t expect it all to be dark and downtempo, though if you want classic trip-hop moodiness it’s there. Keep an ear out for the pleasingly and appropriately stoned dub-tinged skank of Shangri-La and the sunny West Coast psychedelia of opener Live By The Day.
(Out now on Melting Records)