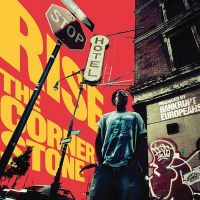 It’s the return of the boom-bap (again) as Brooklyn emcee and former Demigodz member Rise delivers sixteen track double vinyl monster The Cornerstone. And you’ll feel like one fell on you too when your neck snaps to the super-heavyweight minimal funk beats courtesy of UK production team Bankrupt Europeans a.k.a. djs Snafu, Fraser Syme and Signor Cloy. You’ll have to trust me when I say that you haven’t heard production like this since the heyday of the D.I.T.C. crew (at whose altar Bankrupt Euros unsurprisingly worship) while Rise himself has never sounded better.

Rise wastes no time in laying down how it is and how it’s going to be over the double-bass/ rumbling piano keys of opener Miscellaneous – which is to say – he’s been away but now he’s back and it’s time to sit up and take notice although he’s a little bit concerned in case everyone’s forgotten about him, “If I take a little break and stop fucking with rap/ It’s still at the back of my head like the front of my hat.” Yeah – don’t sweat it Rise – don’t think you’ve got anything to worry about mate. Not that he really gives a shit what anyone thinks of course, as Call Me Rise would suggest – “This ain’t a song, this ain’t a hook,” he tells us (on what is blatantly the track’s hook), “The music is on, I’m reading my book” continuing, “However it’s took/ it’s just a discussion wit y’all/ why you should call me Rise or don’t call me at all.” Effortlessly grandstanding while denying he’s grandstanding? Dunno about you but I’m going to call him ‘Rise.’

Lyrical themes include telling other rappers to shut up so he can school them (Quieeeeet), pointing out the vanity of some other people – rappers mainly – (Vanity), the metaphorical chains his life holds him in (Slave) and biblical prophets (!) (Elijah). This last also shows Bankrupt Euros preparedness to venture outside the box as they marry a complex break pattern with sparse piano antics and a folksy/ psychedelic female lament for a hook. Empire Collapse, I Rise and Juga on the other rock the kind of fat and funky vibe you’d expect from Chief Xcel back in the day – while if you like it smooth and jazzy give love-rap Eva some attention. Any which way – this deserves your time.
(Out 30 September – pre-order wax HERE)

Posted on 24th September 2013 no comments