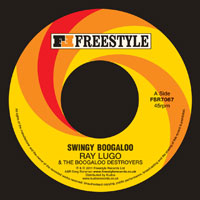 Ray Lugo reboots El Gran Combo’s bugalu classic (the imaginatively-titled) El Gran Combo’s Boogaloo with his own lyrics, simultaneously channelling his inner Tito Puente and bringing to mind all those NuYorican compilations from Soul Jazz Records. It’s the sort of thing that, wherever you are, has the power to evoke too-hot summers in the latin-quarter, where vandalised fire hydrants shower Jose Public like there’s no manana and hot-panted Latinas gyrate to the groove until long into a night warmed by the day’s heat rising off hot concrete. No mean feat given where I live. Muy caliente! Details of forthcoming LP, Mi Watusi in press guff below…
(Out 16 May on Freestyle Records)

Also known as the driving force behind US afrobeat heavy hitters ‘Kokolo’ , Rays latest project brings him full circle as he returns to his latino/New York roots with ‘The Boogaloo Destroyers’ his new project dedicated to spreading the unifying spirit of classic boogaloo, the fusion of influences that fermented into the heady brew that changed forever the future of latin & soul music in the mid to late 1960’s.

Swingy Boogaloo was originally known as the instrumental heavyweight number by El Gran Combo: ‘Gran Combo’s Boogaloo’ . Ray has augmented the original with new lyrics, chorus and title and the results speak volumes about the authenticity of this music. This beautiful little 45 single is a teaser for the forthcoming full length Boogaloo Destroyers album ‘Mi Watusi’ (FSRCD/LP087) which will be creating waves all through Summer 2011, take it from us!