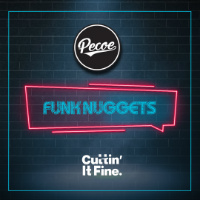 Not had enough funky breaks today yet eh? Alright, let’s try you with a bit of Pecoe – the Perth-based beat-prospector whose recent discovery of a seam of funky ore has culminated in the appearance of five chunky Funk Nuggets. The title track, for example, contains elements (thank you, I’m here all week) of pulsating, pitch-bending 80s funk and appears to be flecked with particles of Stetsasonic while Taste Of Soul and Get In The Groove have been hacked out of pure vintage funk and alloyed with twenty-first century drums and bottom end to give them greater breakbeat density. Everybody Get Down has an even more complex structure and appears to consist of multiple elements though the overall feel is not dissimilar to the beefy staccato-isms, once a key part of big beat’s DNA. Which just leaves the Pecoe Remix of The Mohawks Champ to add a final bit of shine.
(Out 26 October (Juno exclusive)/ 2 November on Cuttin’ It Fine Records)