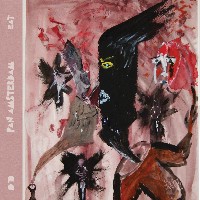 If you caught the debut LP, Pocket Watch, by rapper/ jazz trumpeter Pan Amsterdam (a.k.a Leron Thomas to his folks and jazz appreciating fans), you’ll already appreciate the man’s talent on the mic and his instrument of choice. If you caught that and his subsequent material on the Ha Chu LP, you’ll know he’s worked with a variety of producers and the beats hitherto, at least, had got more and more left-field. Which is all well and good and certainly chimed with our man’s abstract lyrical approach but sometimes – well – sometimes you just need things to bump. Happy the circumstance then that caused Pan Am to hook-up with producer and label-mate Damu The Fudgemunk (fresh from raiding the KPM vaults) for this collaboration LP – the beats on which provide a new energy to Pan Am’s surreal, badly-behaved uncle delivery – oh and for his virtuoso trumpet-playing. So it’s jazz hip-hop, then? Well, technically Jim, but not as Guru knew it.

On opener Rigatoni Damu pairs simple crunchy drums with a classical music sample reeking of Mafia movies over which PA’s lyrical stream of consciousness unfurls with typical surreality (including a centrepiece detailing a stream of chess moves) before giving way to the trumpet outro. Duck Wok is another highlight and not just musically with it’s languid piano-laced beat but because it provides multiple examples of Pan Am’s playful lyrical free association, “Spiritless, thinking they’re limitless/ in the wilderness with Gilgamesh, I digress.” No shit. Not that he’s bothered, seguing directly into, “Gilligaaaaan! Get off the island/ Ain’t no snakes in Ireland,” before, well, digressing unashamedly into any number of unrelated topics before the whole track devolves into what sounds suspiciously like the Dukes of Hazzard’s car horn. Played on a trumpet. Single Hungry Hippo is track five in the set ushered in on a noir-ish groove accompanied by the lyric “I once knew a hippopotamus that was ethically non-monogamous,” thus commencing an acid-trip of anthropomorphic behaviour by a range of animals – several of them strippers. Is he having a laugh? Absolutely! You do know comedy had the same status as tragedy in Ancient Greek theatre, right? Another favourite is Da Da Dim Sum which finds Pan Am taking on the persona of the world-weary artist (perhaps an imaginary more jaded version of one Pan Amsterdam) who gets slightly too refreshed at a Chinese restaurant before going on international tour and launches into a song-length tirade at his host – sample ‘lyric’, “Don’t talk to me about the BBC, I already got one.” Like I said, not quite what Guru had in mind on Jazzmatazz but certainly as good and arguably all the better for it.
(Out now on Def Pressé)