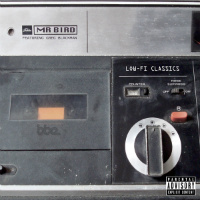 The imminent arrival of the Lo-Fi Classics album from UK ex-pat funky breaks producer Mr Bird and Greg Blackman (the blue-eyed soul voice of choice for the party breaks and ghetto funk massive!) continues the resurgence of quality British soul that has recently spawned recent LPs by Omar and Smoove & Turrell. While the sound of this drop is nominally closer to the latter of these two acts it has a distinct feel all its own. If I could be arsed to knock up one of those pie chart graphics showing the influences on this album it would break down something like this: fifty per cent 90s soul-hop, fifteen per cent latin breaks, ten per cent disco, ten per cent seventies soul, five per cent contemporary party breaks, five per cent tropical funk and five per cent northern soul (there – now you don’t need a fucking pie chart). If you want a shorthand for the Lo-Fi Classics sound however, think breakbeats that more usually underpin b-boy dancefloor anthems topped with Fugee-ish vocals sung by man and actually not all that lo-fi (certainly minus the dusty samples and raw minimalism that such a name might suggest) and you’re ballpark.

Opener Over Again provides one for the ladies with some boogie sound effects and Blackman emoting about relationships over some unintrusive uptempo breaks. Next up is a monkey favourite, Save Me (no relation to the Aretha song) which is all minimal bluesy big band antics with an irresistible shuffle. The Morning’s Coming is sunny twenty-first century northern soul, Get On Through sunny twenty-first century tropical funk heavy on the latin percussion and Bounce To The Beat turns on a b-boy break, some subtle horns and Blackman’s uplifting request that you get off your ass. Like Smoove & Turrell’s Broken Toys, this LP’s influences are referenced rather than reincarnated, often several in a single track, and blended in a way that creates modern breakbeat soul. Retro this is not but it does provide yet more quality soundtracking for your summer.
(Out 14 July on BBE)