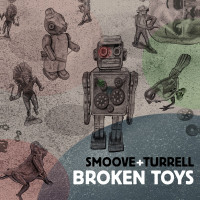 Smoove & Turrell reach that critical career watershed of the ‘difficult third’ album. You know – the one which can elevate a good band to classic status or see a previously good band consigned to the scrap heap like…well…like a broken toy. Sure, debut Antique Soul was particularly well-received and the pair sidestepped the ‘Antique Soul-Pt II’-trap with Eccentric Audio by shimmying down a mirrorball/ ladies’ night route to the dancefloor which ultimately rewarded them with a tour support slot for Nile Rodgers and Chic. But have Berry Geordie and his meaty-voiced partner in crime, Turrell, deftly resisted the urge to sell out, get all self-indulgent or, worst of all, produce a ‘concept LP’ with Broken Toys? Let’s find out!

1. HAVE LOVE
If the boys get airplay-lucky with this, Daft Punk, Pharrell and Nile Rodgers might want to check their rearview mirror…

2. WILL YOU BE MINE
…on the other hand, prepare well and you don’t need luck. This is massive. An enormous mainstream-chart bothering mirrorball banger, club hit and LP standout.

3. LAY IT ON ME
Ah yes, the energetic single – keeping the faith for northern coal…er..soul boys everywhere.

4. LONG WAY TO FALL
Bit of neo-soul emoting. Not much chance of a fall here as this one’s got ‘single’ written on it too.

5. PLAY TO WIN
Always wise to keep your core fans happy too. That’ll mean a b-boy break, hammond organ and a soaring hook courtesy of JT. Probably going to be a single.

6. PEOPLE KEEP TALKING
They do – and probably will be about this LP. A lot. A slower soul-blues-edged stomp with a soaring Motown hook. Could it be a single? Yeah.

7. ALWAYS
Hello – is this the one where they always wanted to be Paul Young? The charts in the early 80s were packed with ballads like this and Paul Young was usually the bastard responsible…

8. I JUST WANT MORE
…back to the mirrorball vibe to get themselves out of trouble. It works. The flip to recent single.

9. THE CLOWN
More soul-stomp. Massive rhythm piano and “I will entertain you” lyrical hook. Didn’t Robbie Williams sing that? Yeah – but it wasn’t a patch on this. Single? Yeah.

10. BROKEN TOYS
The title track. Piccolo, vibraphone – lyrics about where it all went wrong. You get the picture. All highly accomplished though and if they had been short of something to release as a single…

11. ONE WOMAN ARMY
Blues-tinged soul groove and lyrical class: “She got the money, dripping gold like honey/ Got the claws to match to drag you back/ Ain’t nothing gonna stop her/ One woman army, of Gucci and Armani/ That girl’s not right/ She loves a fight and then goes out to party.” Yep – another one.

12. COMING HOME
Latin-tinged, densely percussive mod-breaks, wah-wah, big horn stabs, dramatic hook – we’re getting near the end – might as well pile everything in. Works too. Like stealing candy from a record exec.

13. NOW OR NEVER
Folksy closer. No really. It’s the big the ‘lights-have-come-back-on’ drunken singalong. You love it.

COMMENTS: Good lord! This has more potential singles on it than a dating website and frankly, how dare anyone make a third LP look so easy. Could be the summer that Geordie soul conquers the world. Indeed, if Nile Rodgers and Pharrell are short of a gig, I’m sure these two can find them some support slots…

BEST TRACKS: Will You Be Mine, Play To Win, People Keep Talking, The Clown, One Woman Army
(Out 26 May on Jalapeno Records)