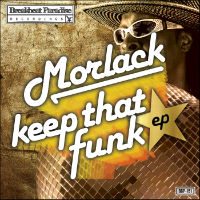 The long-running partnership between the Breakbeat Paradise label and a man who must surely be its most prolific signing, Morlack, continues unabated with the arrival of the latter’s Keep That Funk EP. But how precisely must that funk be kept? Well, given that it’s Morlack we’re talking about here, it must almost certainly be kept between the late 70s and early 80s style-wise, with a hefty bottom end to boot and where samples are used that aren’t Chuck Brown, the outcome must, as far as possible, be made to sound like a twenty-first century breaks distillation of the bastard offspring of Chuck Brown and Bootsy Collins. Such a beast is the opener and title track as well as the buzzsaw assault of Ghetto Girls. Meanwhile Chuck Brown makes an actual appearance by providing a substantial part of Be Bumpin Fresh while DAYo (once apparently covered live by Chuck Brown!) and the Shabba Ranks-sampling Let’s Get It Pt 2 reveal the DC Go-Go heart that against all odds seems to lie inside calypso and dancehall.
(Out now on Breakbeat Paradise Recordings)