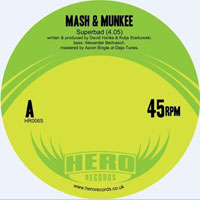 With a name like that it was never going to be acoustic folk was it? Mind you with a name like that they’d better have captured the spirit of James Brown lest they forever be regarded as supershit. Fear not then, for German b-boy breaks merchants Mash & Munkee continue to ensure that nothing but quality leaves the funk factory as A-side Superbad bursts out of the speakers in time-honoured-chase-theme-horns-and-wah-wah fashion and proceeds to leave a trail of sparks through the city streets of San Francisco circa 1972. B-side The Good Vibe is a Renegades Of Jazz remix and since Renegades Of Jazz is David Hanke and David Hanke is one half of Mash & Munkee you might say he is, in a manner of speaking, blowing his own trumpet. Since anything ROJ puts out is a hallmark of quality though, you might expect him to blow it like a bastard. And you’d be right. Hero Records strike again!
(Out 3 October on Hero Records)

(PRESS RELEASE)
Real funk is back! Hero Records are proud to announce the release of their latest limited edition 45 and digital download from Germany’s funk masters Mash & Munkee, ‘Superbad’ b/w ‘The Good Vibe (Renegades of Jazz Remix). Having previously remixed Hero No.7?s ‘Keeping It Real?’ for Hero Records, Mash & Munkee’s David Hanke aka Unifairfly/Renegades & Kolja Starkowski aka Deli-Kutt from Wuppertal in Germany return to the label to release another 2 tracks of breakbeat driven, b boy-flavoured, future funk classics.

Taken from their forthcoming album, the A-side track ‘Superbad’ is exactly that with badass breaks, dope horns, funky flute, sleazy guitar, fat bass and groovy organ combining to form one of the heaviest slices of dancefloor funk you’re likely to hear this year.

On the b-side David remixes their track ‘The Good Vibe’ in his Renegades of Jazz alter-ego. The original version of the track was released by Jack To Phono Records on 7? in 2010 and this remix for 2011 turns up the summer vibes with jazzy guitar and piano added to the Renegades’ trademark heavy funk breaks that have made his previous singles on Wass Records and Hiperbole Records and his remixes of artists such as Kid Loco and Hidden Jazz Quartet such sought after releases.

If you love to get up to get down this is the release for you. If you don’t then you are out of luck as you won’t be able to sit still once you hear either of these tracks. More funk than a trunk of drunk skunks in your bunk!