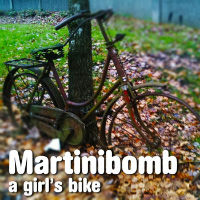 Out now on Loopez’s Nodo label is this free LP from Portland (Oregon) duo Martinibomb. They’ve chosen to name it A Girl’s Bike for reasons best known to themselves though any Britons reading this will, of course, already be aware that ‘A girl’s bike’ (as in, “Nah mate, that’s a fucking girl’s bike!”) is one of the most damning insults that can ever be directed at a male under the age of twelve. Or over the age of twelve. I don’t know if the connotations of the phrase are the same in Oregon – certainly the cover art features a rusty heap of shit that a only a girl would ride – especially if she was in some sort of whimsical fucking French movie. Were the connotations to be the same though, it might be thought that, by extension, something that is metaphorically a ‘a girl’s bike’ (like say an album called ‘A Girl’s Bike’) might have all the same qualities as a ‘girl’s bike’ – i.e. undesirable ones – though were you to make that assumption, you’d be wrong.

A Girl’s Bike is in fact a most agreeable sampledelic pedal through breakbeat electronica recalling such diverse influences as Pierre Henri, Ennio Morricone and John Cage and informed by mambo, cha-cha, disco, hip-hop, and surf guitar. Expect to enjoy ‘found’ sounds cruising in and out of breakbeat collages sampling anything from New Orleans funk (Black Market Mambo) to Tommy Roe on Dizzy Ke Peeche. It’s the sort of thing that puts you into such a good mood that were anyone inclined to describe your bike as ‘a girl’s bike’ while you were listening to this, your response would probably be to smile tolerantly and carry on about your business rather than the more conventional kicking the shit out of them.
(Out now for free download – get it HERE)