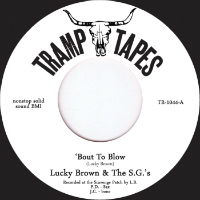 New Tramp original 45 alert as Lucky Brown makes one of his occasional appearances on the label (in the company of the S.G.’s) with some low-down funky action. A-side ‘Bout To Blow is a stank-ass, horns-led instrumental soul stew about as raw as they make it which builds slowly from guitar chanks, adds in the bass and drums and finally keys and horns. B-side Saints & Beggars initially sounds like an altogether smoother affair with big band horns and more rolling percussion and so it is, until the hefty and lengthy drum break in the latter third.
(Out 15 June on Tramp Records)