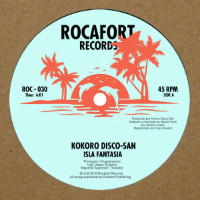 Uncannily dropping at the same time as a colossal heatwave is scheduled to hit Europe comes double tropical disco biscuit and vinyl 12″ Isla Fantasía b/w Sonic Feeling from Barcelona trio Kokoro Disco-San. Who says you can’t rely on the weather? Isla Fantasía is six-plus minutes of pumping, Brazilian-inflected four-to-the-floor action while B-side Sonic Feeling is the only slightly more sedate, laser-fire FX-punctuated, synth-drenched Sonic Feeling. Obviously, you can’t just knock out stuff like that these days without the say-so of disco don, Al Kent (well, not unless you want a ‘visit’) but even he’s on board describing it as something he ‘instantly’ loved. And who is going to argue with that kind of endorsement?
(Out 28 June on Rocafort Records)