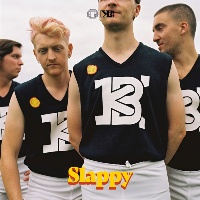 The second single to be released by Melbourne cinematic funkers Karate Boogaloo ahead of their Carn The Boogers long-player is this new one, Slappy. The track features a sparse arrangement, at least initially, with rhythmical organ stabs and guitar over bass pulses and a spare kick snare pattern with double-time hi-hats occasionally punctuated by busier interludes and sounding for all the world like the theme to a Soviet-era, Eastern bloc spy flick. Turns out the track was recorded live to tape in the band’s own studio space, above a factory in Melbourne with tracking and mixing all done by the band themselves. Probably just as well they’ve got a DIY ethic as the world goes into Covid-19 meltdown.
(Out 20 March on College Of Knowledge)