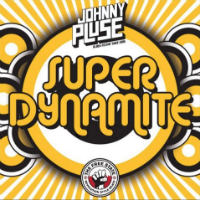 Reports of Mr Johnnypluse‘s retirement from funky breaks to seek house-ier musical pastures have been greatly exaggerated, it seems, as he makes his return to debut releases for the first time in three years with Super Dynamite. Can you expect uptempo dancehall drums spiced-up with hip-hop cuts and an positively explosive 303 bassline that recalls the work of Josh Wink, early Chemical Brothers and The Crystal Method? I’m willing to bet you know the answer to that already.
(Out 9 November on The Free State)