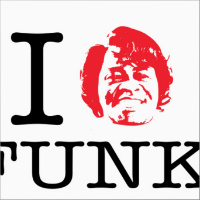 Was this inspired by the epic opening to HBO’s Mr Dynamite documentary featuring the mighty Godfather Of Soul in 1971 doing a blistering live version of Soul Power flanked by Bobby Byrd and backed by two very hot chicks in afros dancing on a podium apiece behind him? It turns out it wasn’t as DJ Rebel hasn’t seen it – but don’t think that means this doesn’t light a fire under the studio version’s ass. Cop it below because you don’t want to fall on the ground – you want to get down! Brucie bonus vid. below that – not off the HBO doc. but 1971 nonetheless, one chick on a podium and Bootsy on bass!