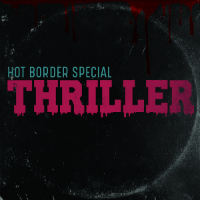 The countdown to the Halloween silly season is well under way and fighting the urge to put out something horror-themed if you’re a band must be akin to being trying to stop transforming under a full moon if you’re a werewolf. Hot Border Special acknowledge they must bow to the inevitable then but clearly figure that if they’re going to be lycanthropes, they might as well be pack leaders. How? By unleashing a mighty afro-funk cover of MJ’s classic Thriller. Which they recorded in Malcolm Catto’s Quatermass studio and got mastered by Shawn Lee and Pierre Duplan. That’s made you wet your pants hasn’t it? Pity really as lycanthropes have a very finely tuned sense of smell and you’re now a massive glowing blob at the very centre of their olfactory radar. No soundcloud or bandcamp as yet so you’ll have to make do with them playing it live a couple of years ago at Secret Garden Party for now.
(Out now on iTunes and Spotify)

Posted on 9th October 2017 no comments