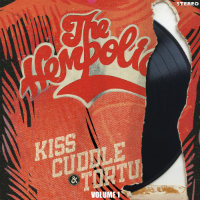 After a number of respectable singles of their own (the dreamy Boss Clock Me Style, the rootsy High & Gritty and the dubby Me Love To Sing) not to mention the best remix of Ghost Writerz’ recent They Wanna Know single, The Hempolics finally drop their debut full-length effort with Kiss, Cuddle & Torture Vol. 1. It’s a title which makes reference to the songwriting process and the varying degrees of ease with which songs are created – though whether the material on this was torturous or easy to make, or a mixture, it’s certainly balm for the ears.

As you might expect, all three singles make it onto this twelve-deep album alongside a majority of tracks which possess a similar irie vibe. What you might not expect is that the balance of cuts present a slightly – er – broader sonic palette for the band’s three vocalists to explore, opener Early In The Morning being a case in point. With its decidedly folksy vocal and muted rock guitars, there’s more than a little Jeff Buckley about it. Not a problem, but perhaps a curious choice of an opener for what is essentially a reggae band unless you’re deliberately setting out to broaden your audience’s comfort zone. The fact that closer Samurai is tantamount to Dick Dale-style surf rock would suggest that, actually, teasing the listener is precisely what the band is up to and probably explains the Johnny Cash-meets-Massive Attack vibe of Armed & Dangerous too. Well, live crowds, they love a bit of winding up don’t they? But of course that’s only a quarter of the tracks on the album and, as mentioned above, the remainder (including the singles) is of a reassuringly rootsy, dubby persuasion. Black Flower still pushes the sonic envelope somewhat, being at least as close to stoner 90s hip-hop as to reggae with its guest US emcee raps, though Warrior Sound delivers Black Ark-ish vibrations, Road Side heads in an almost 70s Wailers-ish direction and In My Brain goes all smoky uptempo dub. Perhaps best of the non-singles reggae cuts are the booming roots dub of Life Ain’t Easy and the longest track – the reggae (as opposed to rocksteady)-era Toots of Hurts So Good – not a Susan Cadogan cover though lead vox do go to the band’s female vocalist Nubiya Brandon. Kiss, Cuddle & Torture Vol. 1 then – best clock The Hempolics’ style, boss, because you’re liable to be hearing a lot more from them.
(Out now on Shark Free)