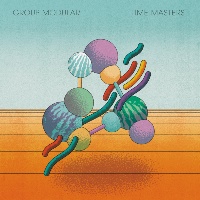 It might have been eight years since debut album The Mystery Of Mordy Laye but Group Modular are finally back with another album-length configuration of sci-fi, psych-funk adventures in the shape of Time Masters. I say ‘finally back’ – there’s a good chance that with the creative juices flowing the band had become utterly oblivious to quaint linear notions of time and have been operating outside of time itself.  We might, for example, imagine a space where it is entirely possible for 2020 and 1969 to coexist simultaneously but for far longer than the length of a single year.  You know how it is when you’re in the zone.  Anyway, they’ve clearly been having a whale of a time putting this together.

Group Modular are of course the Confused Machines label’s Mule Driver and like mind DJ Markey Funk of Delights Records, a duo who bonded long ago over a shared love of 60s and 70s library music – especially if it involved early synthesizers and almost certainly if it was created by Delia Derbyshire who famously arranged the Doctor Who theme. Like its predecessor, Time Masters pits vintage synth-sounds against fat drum breaks and also numbers fourteen tracks. If that sounds a little bit Groundhog Day though, fear not, this is neither a repeat of …Mordy Laye nor its analog from an alternative universe.  For one thing, our men aren’t claiming to be curating the lost works of an unsung master this time but are instead quite open about having invited along six highly skilled drummers (including The Apples’ Yonadav Halevy, Hoodna Orchestra’s Matan Assayag and Trillion’s Hezusto) to lay down syncopated science over which they proceed to overlay sonic textures.  Said textures recall classic compositions by the BBC Radiophonic Workshop’s work for Quatermass projects and early Doctor Who to produce a highly evocative work which can be haunting (Hommes De Metal), wistfully atmospheric (The Phantom Mazone) or downright creepy (Ignition). In particular look out for Black Sphere which features a John Carpenter-esque melody played on pre-John Carpenter synths and the tensely funky groove of The Whale Submarine.
(Out 13 November on Polytechnic Youth)

Posted on 12th November 2020 no comments