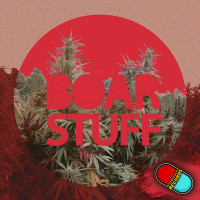 The latest (and arguably best) drop yet from the Funkosol stable is Boar Stuff . And, while nothing whatsoever to do with wild hogs, it nevertheless assembles a clutch of artists who’ve been rooting around successfully in a forest of samples. Witzky‘s unearthed Albert Hammond’s AOR strum I’m A Train for example, and given it a ghetto funk going-over. SonicFUNK has snuffled up a number of treats for ghetto funk instro tribute to hip-hop, That’s Hip-Hop, and party breaks number Do Your Feeling and DJ Agent 86 goes all ’86 electro with Eastside Lowride. Main props have to go to The Man From DelMonty though who opens the whole affair by saying ‘yes’ to the concept of the epic bootleg and then provides two – King Of California and Anyone Can Get Enough. On the former the San Diego-based producer mixes up Dre with Luis Bacalov off the Django Unchained OST while on the latter he delivers an inspired pairing of Irma Thomas and J Cole. A man to watch.
(Out now on Funkosol)