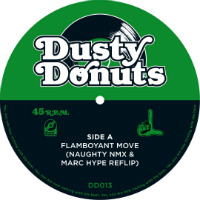 2018 seems to have brought with it an influx of musical goodies and here’s another. That’ll be Dusty Donuts 13 then which – while an unlucky number for some – is likely to prove lucky indeed for djs, for both sides are lady-catnip. On the A, Marc Hype and Naughty NMX make the Flamboyant Move of re-flipping James Gilstrap’s much-sampled seventies disco slowie Move Me. Not only do they beef-up the beat and bring the tempo up to dancefloor hip-hop speed but you now get an outro now so extended you practically have half the track to blend like a bastard with your chosen ‘rapapella. Turn that puppy over and what could be easier to love than I Don’t Understand Love – a heavy dancefloor Sister Sledge re-flip? Ladies say, ‘Ow!’ Again!
(Out end of Feb. on Dusty Donuts)