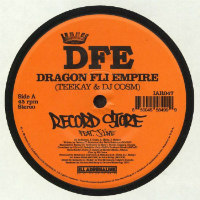 No dead-of-winter lethargy for Calgary’s Dragon Fli Empire on the evidence of fresh dope 45 Record Store b/w Fli Beat Patrol. Side A sees Teekay and guest emcee J-Live trade bars over a bossa-based beat in a tribute to music in physical format – vinyl specifically – and the emporia in which such archaisms could once be found and indeed still can be if you look hard enough. Flip it over and guest producer Djar One is once more behind the boards for the even better, b-boy-friendly Fli Beat Patrol on which Teekay delivers another tribute – this time to hip-hop’s parents, funk and soul, and to the golden era – altogether now, “boom-bap, hand-clap, take control/ wouldn’t have rap without funk and soul!”
(Out now on Ill Adrenaline Records)