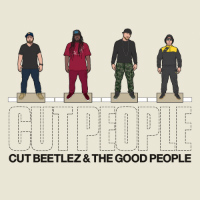 Cut master! Cut faster! Yes – the ‘Fabyl four’ (a.k.a Finnish production duo Cut Beetlez and the two-man NYC rap attack The Good People) team up again in the wake of recent single Bad News for six-track EP Cut People, which – like the single – is very good news. Now then – if I was in an outfit called the Cut Beetlez, I’d probably want to get straight to the point with some nifty turntablism on the opener. Enter the scratch n cut-tastic Both Did Their Own Thing.  This is followed by Bad News and then the equally boom-bap  – er – Then which again rocks that late nineties undergound vibe – slow bpms; heavy on the drums and the samples. 100% Dis pairs cartoon soundtrack loops with ‘madcap’ MPC beats before the arrival of the closer Wildest which lives up to its name with a Wild West showdown theme. On this one, frantic 50s cowboy serial-style OST snippets underpin The Good People doubling up on the delivery speed for a track which, like two of the others, is barely more than skit length at a blink and you’ll miss it 1 minute thirty eight. Indeed, nothing on the EP tops even two and half minute because these boys don’t hang around!  Oh yeah – did I say that Wildest was the closer?  Well sort of – you also get instros of all the vocal tracks too – even more good news!
(Out now on Fabyl Recordings)