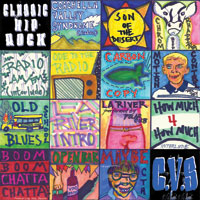 Like hip-hop and Frank Zappa? Yeah? You’re gonna shit when you hear this. Classic Hip-Rock is the latest project from Californian heads Mr CTA (that’s ‘Mr Christopher’ to you) and DJ/ Producer Rex Rey who manage to channel everything from what sounds like funked-up Anticon-style hip-hop to Zappa-esque flights of psychedelic whimsy via the mellower moments of Primus and Mr Bungle. In short, their album Coachella Valley Syndrome (or Beefheart, Rhymes And Life, as I like to think of it) musically wriggles around like a rattlesnake on a crazy desert blend of crystal meth and the chronic, though this phases Ray not a jot – for his production is never less than tight. Mr CTA comes on like a less nasal Dose One dropping piss-taking, geek flows like, “Coming straight outta Palm Springs/ Sonny Bono and thong strings/ On hot things/ Baby show me your golf swing” (well – he is also known as ‘Old Nerdy Bastard’) backed up by Beck-like vocal harmonies from producer Rey. If you want something approaching a straightforward hip-hop beat – look to Son Of The Desert where tremelo guitar chops punctuate funky staccato beats or the fairly self-explanatory Boom, Boom, Chatta, Chatta. Elsewhere expect things to get a bit more trippy/ blues-y/ and even – er – eighties as the LP allegedly presents two lost ‘classics’ from criminally overlooked new wavers Polar Club – who bear an astonishing sonic resemblance to the musical output of one Mr CTA and Rex Rey esquire. Coachella Valley Syndrome is, in summary, an accomplished slice of quirk-hop and the perfect accompaniment for a late night toot.
Listen to – Classic Hip Rock Presents: Coachella Valley Syndrome
(PRESS RELEASE) Producer Rex Rey offers a trip across genres, from the catchy hip hop of “Son of the Desert” to the smooth retro of “LA River.” MR.CTA’s lyrics are the stuff of an awkward past, filled with stories of Coachella Valley adolescence and self-deprecation. His clever riffs, delivered in an ever-changing cadence, never allow us to take him too seriously and that seems to be just what he wants. Rex Rey breaks in every once in a while with his haunting voice, punctuating the songs with a soulful urgency. Coachella Valley Syndrome is an album clearly unafraid to bend the rules and delivered with a smirk.

POLAR CUB (1983-1987)
Formed in 1983, some considered POLAR CUB to be WHAM!’s “mentally challenged” step brother. Cult classic songs included, “Wished He Was A Woman”, “Hard To Figure.” & “Loving You Is Hard To Do” Although their first few albums were panned by critics and the public alike in America, the music was lauded by a small niche of Dutch bikers. Starting out playing bar mitzvahs and high school proms POLAR CUB were propelled into the Eastern European Synth-Pop Scene in 1986 with their #1 breakthrough hit, “LA River.” This was a love song detailing the trials and tribulations of front man Eddie Trunk’s brief affair with transsexual Louise Albert Rivers, (affectionately known by her stage name ‘The LA River’) who died in a McDonalds robbery in downtown Los Angeles in 1985. Trunk eventually contracted HIV in 1988 a year after the breakup of POLAR CUB but managed to pull through with the aid of the Magic Johnson AIDs cocktail. He credits Jesus for helping him survive. Eddie went on a revival tour with Benny Hinn in 2000. Classic Hip Rock presents this lost gem in its all its glory.