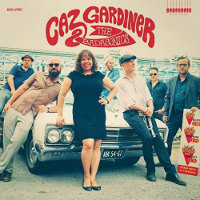 Wondering whether Caz Gardiner & The Badasonics were going to live up to the promise of the spring’s Never Gonna Let/ Tic Tac Toe single on their self-titled debut long player? If so, I can confirm now that the answer is a resounding yes as the band (consisting of Washington DC vocalist Gardiner and a Belgian contingent of former Moon Invaders and Caroloregian members) delivers a glorious collision of what is almost exclusively Motown-era Supremes-meets-Phyllis Dillon-style rocksteady on a twelve-tracker consisting of three covers and nine equally dope originals.

If the Motown reference surprises on the basis of the two rocksteady tracks comprising the first single, park that thought until you’ve heard northern soul opener Out Of Time which most assuredly deserves a 45 release and will be lapped up by those looking for new gems to file alongside the classics. The fact that this highlight is one of the cuts penned by the band themselves (as were the tracks on the single) suggests that here is an outfit who know their onions – indeed, not only know them but have probably grown them from seed and then written a book about them. And while this is pretty much the only pure soul cut on the LP, you can rest assured that soul is in plentiful supply on the rest of the tracks which otherwise consist of very soulful rocksteady or, as the PR has it, ‘funky soulsteady beat.’ About which you won’t find the monkey complaining at all. The covers are a version of Marcia Griffiths’ Feel Like Jumping played pretty straight (apart from a couple of bars in the bridge which nod to Mr Big Stuff), and inspired rocksteady versions of Erma Franklin’s Piece Of My Heart and Lyn Collins’ Wheel Of Life. Both tracks from the lead single (the aforementioned Never Gonna Let and Tic Tac Toe), along with I’m Dancing, With You and closing uptempo bomb The Train show the band have the chops to deliver their own nuggets as well as cover others though. Here’s to many more such drops. Despite all this, embeddable audio for the album doesn’t appear to be avaible – best link is Spotify HERE (the embed option for this was unavailable at the time of writing) and you can check the debut single (again) below.
(Out 28 September on Badasonic Records)

Posted on 23rd September 2018 no comments