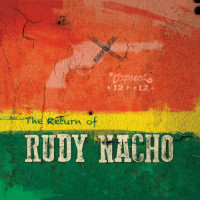 Back in the day, spaghetti westerns were something of a source of inspiration for ska bands and it’s a vibe channelled in both the name and the whistle n’ banjo-Once Upon A Time In The West-style intro and outro of The Return Of Rudy Nacho. But if the ska that The Crystalites, The Upsetters and the like used to put out is six-shooter stuff, the reggae, reggae/hip-hop, ragga and jungle flavours of bashment on Capitol 1212‘s debut long player is more like nuclear weaponry.

That’ll be ten tracks then (not including the intro, interlude and outro), each one featuring a vocalist from an impressive list of dancehall/ sound-system luminaries consisting of: Danger Man, Gappy Ranks, M.A.D., Tenor Fly, Million Dan, Donald D, Daddy Freddy, Serocee, Hunta, Daddy Scotty, Profisee and Junior Bear. Not a bad line-up for a debut LP I think you’ll agree and testament to Capitol 1212’s back catalogue of quality. Look out in particular for the Gappy Ranks-featuring reggae beast Born As A Warrior, digi-rap-reggae closer Haven’t You Heard (featuring Profisee and Junior Bear) and Donald D’s history of reggae/ hip-hop over a replayed bit of Booker T. The Serocee cut (and the LP’s debut single) Making Disturbances still wears the poncho though.
(Out now on Irish Moss Records)