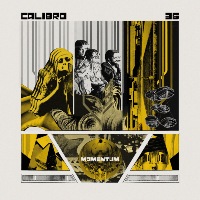 If Calibro 35’s previous LP, 2018’s Decade, marked something of a watershed in what was the tenth year of their career, so, apparently does new one Momentum.  The band put it like this, “If Decade was the sum of everything…in the previous ten years, Momentum is the prequel of what you will hear in the next ten.” And they do have something of a point. Not only does the new album feature two vocal tracks, it finds the Milan-based outfit using a greater number of electronic sounds and (if you believe what they say) take, “a look at nowadays and a reflection about making music right in the time that we’re living.” What no retro? Well the PR does list such ‘modern’ inspirations as Ennio Morricone and 60s/ 70s Italian soundtrack composer Sandro Brugnolini alongside some who have a more convincing claim to modernity such as Jaggajazzist, Comet Is Coming and JPEGMafia – not to mention DJ Shadow and Budos Band. All of which averages out at the band going for more late seventies/ early eighties sonic inspiration as opposed the sixties and early-seventies-centric sounds of earlier work.

Glory Fake Nation opens proceedings rather moodily with doomy bass and a rolling drum break before suddenly allowing ethereal voice samples to break through the clouds closely followed by some virtuoso yacht rock guitar noodling. This is followed by Stan Lee, the first of the vocal cuts and also the album’s distinctive first single featuring former Slum Village rapper Illa J who both raps and sings an earworm of a falsetto hook. Death Of Storytelling returns to the moodiness and sounds like a live band covering one of the melancholy compositions from Shadow’s debut Endtroducing while the lurching, Automata vacillates between queasy retro synth and organ antics – even managing to channel Hideaki Sakurai of Shogun Assassin OST fame at times.  Tom Down, on the other hand, contrasts with much of what comes before it by sounding very much like the crime-funk soundtrack Calibro 35 of old, turning on an insistent bass hook and heavy keyboard atmospherics and possibly the monkey’s favourite cut although a Theremin-like synth turn enables 4X4 to run it close.  However, it’ll almost certainly be the second vocal track – Black Moon featuring London rapper MEI doing a turn over a minimal jazzy groove – to get picked as the next choice of single, should there be a third.  And there’s every reason that there should be a third for Momentum provides compelling evidence that Calibro 35’s drive is as potent as ever.
(Out now on Record Kicks)

Posted on 5th February 2020 no comments