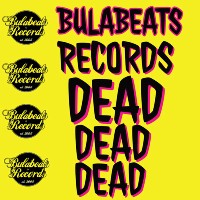 If you didn’t already know, Johnnypluse recently announced his retirement from the music scene and thus the end of Bulabeats Records – which is going to leave a great big hedonistic hole in the breakbeat music scene. Johnny and the label do have one last hurrah though in the form of final drop Dead Dead Dead at the end of the month. A twelve-strong set, it is a ‘best of’ compilation drawing together a range of tracks from JP’s career and taking in various shades of breakbeat music. As a consequence, you’ll find the ambient breaks of opener Snack Box Blues and Have This On Vinyl rubbing shoulders with the Latin-infused The Break Out, righteous half-speed dnb party number The Skank Out, the very old school Dole Dance and big beat banger The Market Street Hustle. So long JP and thanks for all the beats!
(Out 2 May on Bulabeats Records)