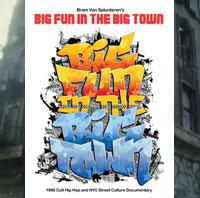 Filmed in the sunny New York of 1986 it captures all manner of old school luminaries – at a time when most of them were little more than kids – both on stage and in interview. Highlights include a visit to eighteen year old LL Cool J’s gran’s house which contains a pretty impressive giant red leather corner settee, interviews with the CBS crew, and live footage of Biz Markie and Roxanne Shante. You also get to see Doug E Fresh demonstrating his beatbox technique, one of the Last Poets complaining about the lack of social commentary in rap (had he not heard BDP?) and an interview with Russell Simmons. Then there’re the bits with Marley Marl, Grandmaster Flash, Run DMC and MC Shan. Actually it’s all highlights really – although special mentions have to go to Schooly D for worst dancing on stage (but we’ll let him off because of the rhymes and attitude) and Chicago’s Mystery Crew spitting fire in the street outside of Def Jam’s office. It might only weigh in at 40 or so minutes but this is a pretty much essential audio-visual b-boy document.
(Out 22 May on Five Day Weekend)