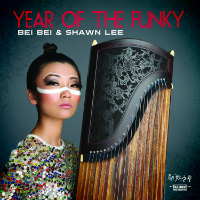 Did you know it was the Year Of The Funky? Well, technically, it’s actually the Year of the Rooster but that wouldn’t convey in the quite the same way (or actually, not at all, if we’re being honest) the Guzheng-plus-funky-drums combo that is the new album from Guzheng virtuoso Bei Bei and multi-instrumentalist Shawn Lee. For that is precisely what we have here, seven years after the release of its predecessor, 2010’s Into The Wind, as the pair hook-up again for a similarly beautiful outing.

However, while clearly in the same musical ball-park, there are subtle but notable differences in the content. Into The Wind featured a couple of English language vocal tracks for example, but there’s no such dalliance with the human voice on its sequel, English or otherwise. There’s no trip-hoppy material like that of The Master Room either and it also lacks the more complex syncopated drum-breaks of Eastern spy funk cuts like Hot Thursday and East. Indeed the second half of the LP (which like Into The Wind numbers twelve tracks) is mainly made up of tracks like, Attenzione, See You Again, Soft Dream and Water Lotus, where percussion is minimal or even absent. That isn’t to say Shawn Lee’s funky sticks skills are absent – far from it. And if you want breaks action, it’s certainly there – notably on the title cut and the tense 70s theme-tune lope of Black Nylon. Genre-wise, there is also a return to bossa with Bossa Rossa and Danxia Disco which takes 80s Euro-disco all the way east.

If anything, Year Of The Funky is often more minimal than its predecessor and arguably more Chinese-sounding as a result. You could certainly get your tai chi on to Water Lotus at any rate which is practically begging you to engage in Wudan sword meditation half way up a mountain. And who doesn’t want to do that? In short, it’s a thoroughly satisfying audio experience and it’s tempting to say, as Kojak definitely didn’t and Shawn Lee fairly certainly hasn’t (though you’d love to think he might have done) – ‘Who loves ya Bei Bei?’
(Out now on Legere Recordings)