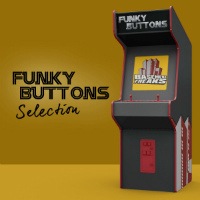 Those familiar with the party breakbeat ouevre of Basement Freaks’ may be a tad surprised to find Giorgios Fotiadis dropping a chilled set of mainly 80s-influenced funk on new mini-album, Funky Buttons, but they won’t be disappointed. The nine tracks on this release were created over the summer and are so thoroughly imbued with the heat of the season they more or less create their own micro-climate within earshot of being played. Imagine if downtempo funky breaks had been invented by Jan Hammer a year or two before Miami Vice came out and you’re ballpark basically.

Things kick off with the blaxploitation-dialogue of the intro and then we’re straight into the low-key atmospheric blaxploitation groove of Junkyard. Admittedly the sound on these is more late seventies than early-eighties and arguably the same is true of the jazzy rolling drums, clavinet and horns of the languid Attic Blues because it’s not until next track, Enuff Love, that the sonic segué between two eras truly arrives. Here, more obvious eighties boogie influences become evident and by the time you reach Hip-Hop Sonic there are eighties thrills aplenty as old school hip-hop vocal cuts are combined with pitch-bending synth work against a backdrop of Rhodes piano. Charlie’s Crib then heads in a Rick James-ish direction and is followed by more eighties boogie style stuff on Moody Moves which features prominent talk box vocals. Of the final two tracks, the first consists of a semi-cover of a certain Gil Scott-Heron number (in an eighties funk stylee) entitled The Revolution Will Be Digitized and featuring new vocals while the second is an outro that once more combines seventies and eighties sounds in a synth n Rhodes-drenched groove. In short, a versatile set perfect for an afternoon by the pool or warming up the crowd or even the post-party comedown. Consider your funky buttons well and truly pressed. Cop it via the player below and check the Soundcloud player for the promo mix which includes additional Basemen Freaks booties.
(Out now HERE)