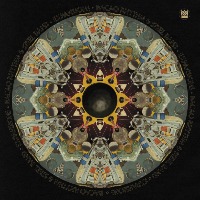 We all heard Expansions, the third LP from steel drum funkers Bacao Rhythm & Steel Band was on the way, right? And not just heard about it either but checked previews of some tracks and got a single-length taster in the form of recent 45 Dirt Off Your Shoulder with I Need Somebody To Love on the flip. A full preview was tightly under wraps though, even when it came to the PR.  Mind you, there must have been a bit of pressure and expectation given the excellence of 55 and The Serpent’s Mouth, so frankly, I’m not surprised Björn Wagner’s ‘other’ lot (he’s also The Mighty Mocambos’ big cheese as well) kept the full monty unaired until release date. They’ve previously filtered funk, disco, reggae and hip-hop through a steel pan-drenched instrumental prism and mixed up excellent covers with equally dope originals but the big question was ‘What approach would they take for this one?’  Would it be heavier on  original compositions?  If they did covers, what would they be?  Would they consider adding vocals to the mix?  I don’t know about you but I think with all these concerns, it might be time for a track-by-track breakdown.  Let’s have a gander at what they’ve done…

1. TOUGH VICTORY
Tough gig – what to open your third LP with when a scene’s eyes and ears are straining in your direction? Go balls out with an original composition? Why not? So here’s this sweaty tropical chugger with Latin guitar stylings.

2. SPACE
Woo-hah! No one but Bacao would have the Galt (see what I did there?) or skill to pull this off, and so here this is…

3. RAISE IT UP
…which frees them up to go Slum-ing it Dilla cows come home on the next one.  Yes! He’s on fire and so are Bacao.

4. MY JAMAICAN DUB
So it’s only right to switch things up for a Grace Jones cover in which the original’s new wave-y/ disco gets switched up for fluid dub-funky shenanigans that’ll have you living your life as a slave to the rhythm.

5. I NEED SOMEBODY TO LOVE TONIGHT
Don’t we all? But this 55 gallon slab of slo-mo disco should reel ’em in.

6. DIRT OFF YOUR SHOULDER
Quite right. Stand up for ya bad self as organic drums replace programmed ones and pans replace synths.

7. GETTING NASTY
Bacao obviously didn’t get the message that the second half of many LPs shows a marked drop in quality as they school you with a concrete lesson on how to tropically cover Ike and Tina…

8. BLOW YOUR COVER
…and then reveal that they have every intention of making the entire second half better than the first with urgent steel funk…

9. REPRESENT
…a glorious, minimal nugget that RZA will lap up…

10. THE HEALER
..and something I’m sure both Erykah and Dilla would lap up.

11. LES FLEURS
Alright, they’re just taking the piss now. Will I get in ‘Pseud’s Corner’ in Private Eye if I describe this Minnie Riperton cover as sublime? I honestly don’t care. Because it is sublime.

COMMENTS: I’m starting to think it’s all bollocks about third albums being difficult and if making this was, the results more than make up for the effort with an especially strong second half . Another triumphant Bacao bomb – and if they never make another record, their legend is assured.