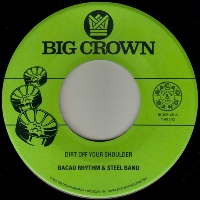 If you wanted a taster of the next Bacao Rhythm & Steel Band LP, Expansions, due at the end of next week (and lord only knows why you wouldn’t!) then here it is – lead single Dirt Off Your Shoulder backed with I Need Somebody To Love. The first is, of course, a fluid steel drum funk version of the 2009 Timbaland-powered Jay-Z cut that’s so classy, it’ll have you brushing your shoulders off all over again as organic drums replace programmed ones and steel pans supplant synths. Over on the flip, it’s the first time any of Bacao’s disco-oriented re-versions have made it onto wax as the stoned disco boogie of Sylvester’s I Need Somebody To Love Tonight gets re-imagined in a somewhat livelier manner whilst employing the sound of Trinidad & Tobago. As if that’s not enough, next single Space is out digitally too. What are you waiting for?
(Out now on Big Crown Records)