ALDO VANUCCI: Digging For A Living 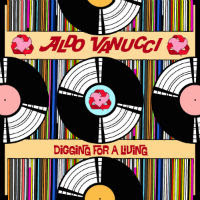 As with its predecessor, Aldo Vanucci’s second long-player, Digging For A Living, goes by a title that references its debt to samples while its mix of soul, funk and hip-hop-flavoured party breaks continues precisely where Straight Lift left off, as if a mere twelve years hadn’t elapsed between release dates. It is called Digging… not Releasing… though and I think we can all agree that spending hours alone in a back-breaking crouch sifting through dusty vinyl in some obscure stateside warehouse beats the cocaine and groupie sex of any Jalapeno Records album release party any day. Then again, there have been a considerable number of dope edits, singles, EPs and collabs from Mr V in the interim, so who knows? The real question is, can he still kick it full-length? Let’s find out!

2. ALL MY LIFE feat. BOO LA LA
…followed by this smouldering, horns-laden cover of – would you believe it – Foo Fighters. Works well though…

3. YOU’RE ALL SHOW feat. KYLIE AULDIST
…oh – and this utterly stank slab of big-band funk featuring Auldist on top form. Admittedly, this did come out on the Love Is Loops EP seven years ago, but Mr V takes a while to get his LP head on, remember?

4. NAIVE feat. AMIE J
The other cover – this time of the ubiquitous Kooks’ single – which sounds infinitely better as a grooving jazzy breakbeat without strangled vocals.

5. BREAKING THE RULES feat. AMIE J
The second of three Amie J tracks and the first slowie – a summery slice of soul-jazz.

6. TAKE ME TO A PARTY feat. ASM
Like kindred spirits The Allergies, Vanucci isn’t averse to an ASM collab. to up the hip-hop quotient. This is of the same vintage as You’re All Show though, so Vanucci got there first.

7. GET A HOLD ON THIS feat. KYLIE AULDIST
Another Auldist collab. which first came out on Love Is Loops Vol. 2 EP but with neo-northern soul this stomping, you’d include it too.

9. WHAT HAPPENED?
Another Love Is Loops Vol. 1 cut (it was a great EP!) though this time it’s all about the moody downtempoisms with a vintage sampled hook.

10. I THINK I’M GONNA MAKE IT feat. AMIE J
Amie J for the final time with a slice of summery 80s boogie-inflected breaks. By the way, Amie J is not a nom-de-plume for Aldo Vanucci, whatever Discogs says.

11. KNEW YOU WERE COMING
Talking of 80s boogie, it doesn’t get much more 80s and boogie than this, if that’s your thing.

12. SPELL IT OUT feat. QnC
Finish on another highlight? Why not? NYC legends, Q-Ball and Curt Cazal of JVC Force grace a dreamy and richly layered beat.

COMMENTS: Well, there’s no doubt as to the solidity of that set – every bit as deserving of success as LPs by fellow travellers (not to mention labelmates) The Allergies. Important to remember Aldo was doing it first though, even if Moneyshot and Rackabeat sneakily slipped out three albums while Vanucci’s back was turned.

BEST TRACKS: Ponderosa, You’re All Show, Get A Hold On This, Accumulation, What Happened?, Knew You Were Coming.
(Out now on Jalapeno Records)